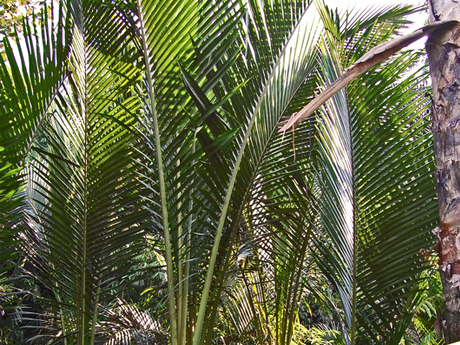 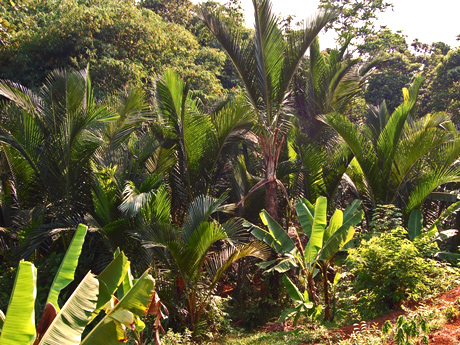 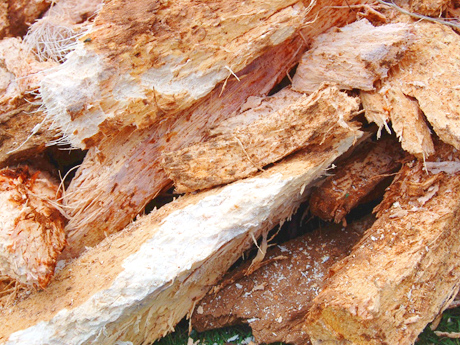 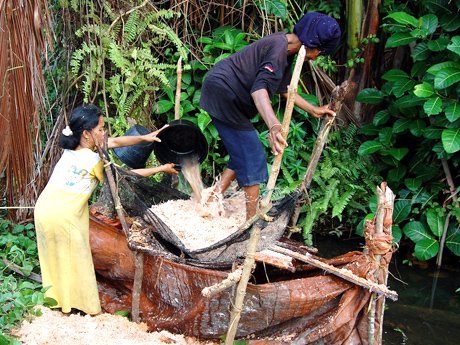 Sago palm is a plant originally from Papua New Guinea (PNG) and belongs to the genus Cycas in the family Cycadaceae. At present, it is commonly seen in marshy areas in PNG and other countries such as Indonesia, Malaysia, Thailand, and the Philippines. The main characteristic of sago palm is that it stores a large amount of starch in its trunk. There are about 10 genera that produce starch other than Cycas, but Cycadaceae cycas (M.sagu Rottb.) is said to accumulate the most. Sago starch has traditionally been an important staple food and a source of cash income for local residents.

The productivity of sago starch greatly depends on the growing place and planting density, but is said to be 0.8-15.5t/ha in natural and 1.5-37.5t/ha in semi-cultivated forests, and in cultivated forests, 2.8-15.5t/ha, for example (Yamamoto, 2010). These figures are higher than the productivity of tapioca, which is cultivated in tropics all over the world. In addition, sago palm can be grown in bogs, which are deemed to be of low economic value as other crops will not grow if undeveloped. Creating economic value using sago palm may lead to the protection of the environment in countries like Indonesia, where carbon dioxide emissions due to the development of bogs are serious.

According to Ehara(2010), the growing area of sago palm is about 2.5 million ha while that of cassava was 24.22 million ha in 2014 (FAOSTAT). Sago palm is actively grown in around 9% of the area, and otherwise it is extensive cultivation and there are areas where sago palm is not even collected. Sago palm is actively cultivated mainly in Indonesia. There is the possibility that the supply and value are not stabilized as the collection system does not work well with harvesting places dotted in remote places under extensive cultivation.

Sago palm propagates through branches called suckers that come out from the base of the mother trunk. A sucker will form a new trunk 2-3m away from the mother trunk, and bloom and bear fruits in about seven years. In the course of blooming and fructification, the starch stored in the trunk decreases rapidly, so it is usually harvested in six years from the new trunk formation just before that (Nakamura, etc., 2010). However, under extensive cultivation, there is the possibility that appropriate planting density is not maintained with suckers left as coming out from the mother stem one after another, and the estimated production amount is not achieved due to late harvesting. Generally, sago palm does not need fertilization, but the yield cannot be increased without controlling suckers and harvest timing.

To collect sago starch, first divide a sago palm trunk into logs of about 1m and crush the contents into pieces to extract the pith. Then immerse the extracted pith in a water tank, scoop up the sediments, and dry them. The collection method is extremely primitive, but it is desirable to thoroughly eliminate contaminants and dry for export to Japan.

Starch resource plant that can grow in bogs

Starch is used for extremely diverse purposes. There are various raw materials such as corn, wheat, rice, cassava, potato, sweet potato, sago palm, and different materials and processing methods are used depending on the purpose. Seventy percent of produced starch is used for food. When starch paste is used for food, it serves as a thickening stabilizer contained in Japanese confectionery. In Japan, sago starch is used only as dusting flour for udon noodles, and the transaction volume is limited. In Indonesia, which is a producing country, it is greatly used as an ingredient of confectionery, noodles, and cakes.

Sago palm, which can produce starch in bogs where other plants cannot grow due to the oligotrophication and low pH, has traditionally garnered significant attention as a savior plant when a food crisis is feared. Also, it is an important cash income source of local residents in bogs, which are of low economic value. In Sungai Tohor Village on Tebing Tinggi Island in the eastern part of Riau Province, Indonesia, sago palm is a precious cash income source, and activities are underway to prevent the development of bogs which may lead to peat fires.

However, at the moment, active cultivation of sago palm is rare, and it can be said that current production is small compared to the potential amount estimated from the growing area. It is said that, by developing bogs that are of low economic value, the value can increase but, at the same time, a large volume of soil carbon is emitted as carbon dioxide and affects climate change. Cultivation of sago palm and diffusion of its starch may depend on how economic value can be created without developing bogs.

Japan imports 14,000 t of sago starch from Malaysia and 4,000 t from Indonesia annually. The import amount from Malaysia is on a decreasing trend from 2008, but that from Indonesia is increasing. The import unit price has tripled in the last 15 years or so. Most sago starch imported to Japan is used as dusting flour for udon noodles, pot stickers, and others. With that alone, there is little chance of demand increasing drastically. Sago starch is imported in a raw condition, most of which is oxidized. The basic tariff for importing raw starch is 140 yen/kg and the WTO agreement tariff was 119 yen/kg while there is no tariff to be applied when it is processed. It can be seen that the tariff rates are set at a very high level considering the import unit price. From listening to a trading company that imports sago starch, the high tariff rates are one of the reasons that the trade volume of raw sago starch is small, but in Japan, there is not enough demand to build factories locally, and it will be difficult to handle it if the price keeps rising.

Import trends of sago starch from Malaysia and Indonesia

In Japan, a general starch manufacturer, Japan Cornstarch Co., Ltd., launched a cornstarch-based alternative material called Substitute for Sago Starch in 2012 when the price of sago starch surged. It might be due to that, that imports from Malaysia and Indonesia decreased in 2012. However, they have been on an upward trend in recent years and the import unit price has increased. Sago starch is expected to be used as processed starch for swallowing supplements with its good fluidity and low viscosity. Also, it can be an anti-allergic food for wheat allergies and so on. It cannot be expected that overall demand for starch grows significantly in Japan in the future due to the decreasing population, but aging of the population and preference for health foods are likely to continue. There is apossibility that demand for sago starch will increase depending on how it is marketed. For that, quality maintenance, stabilization of the supply system, etc. are necessary.

Malaysia, which is an important starch supplier to Japan, imports sago starch from Thailand in order to meet domestic demand. Due to the increase in demand for agricultural products along with the economic growth of Malaysia, demand for starch mainly used for noodles increased drastically from 3,000 t to 15,000 t between 2000 and 2010. There is the possibility that, along with further economic development of Malaysia, the trade price of sago starch in the country will increase and the purpose of the produced starch will be domestic market use rather than export. Our country may need to consider measures for stable supply before it is too late.